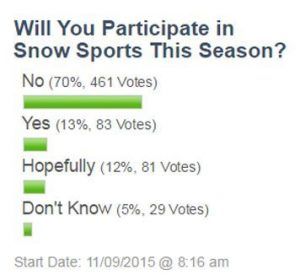 With the first snow of the season and an opening for Bear Valley Ski Resort planned for November myMotherLode asked “Will You Participate in Snow Sports This Season?” The results of the informal poll found 25% voting optimistically with 13% Yes and 12% “Hopefully” going to enjoy snow sports. An additional 5% hadn’t made up their mind and 70% voted No.

This week’s poll also brought to mind a March 2015 poll about another vigorous physical activity. The poll asked, “Could You Run, Without Stopping, For One Mile?” The poll recorded 717 votes with 55% No, 29% Yes, and 16% Maybe.

Another seasonal question was asked this week: When Do You Plan to Put Up A Christmas Tree? Only 1% already had a tree up, 4% plan to soon, 32% are waiting for after Thanksgiving. Another 10% are shooting for December 1st and the rest, 26% plan to put up a tree “Later in December.”  In total 73% have plans for a tree and 27% voted “No tree for me.”