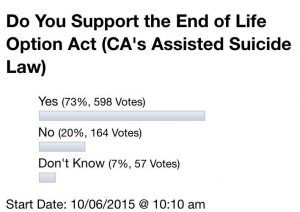 A four day informal myMotherLode poll this first week of October asked “Do You Support the End of Life Option Act (CA’s Assisted Suicide Law)” The results were 73 percent Yes, 20 percent No, and 7 percent Don’t know.

As reported earlier here Governor Jerry Brown signed a bill to amended California’s Health and Safety Code on Monday, October 5th. The bill was approved by the Senate 23 to 15 on June 4th, 2015.

Governor Brown states “I read the thoughtful opposition materials presented by a number of doctors, religious leaders and those who champion disability rights. I have considered the theological and religious perspectives that any deliberate shortening of one’s life is sinful.” Brown continued, “I have also read the letters of those who support the bill, including heartfelt pleas from Brittany Maynard’s family and Archbishop Desmond Tutu. In addition, I have discussed this matter with a Catholic Bishop, two of my own doctors and former classmates and friends who take varied, contradictory and nuanced positions.”

The law now states that a person 18 years of older who is able to make informed medical decisions, after requesting three times and meeting all the requirements of a checklist confirmed by a second physician, may be prescribed a lethal drug dose by their primary attending physician due to a terminal disease. The five point checklist requires documentation of the two verbal requests a minimum of 15 days apart and that the third request is written, signed and dated in the presence of two witnesses and the primary physician. Further documentation of the end of life request requires the physician find the patient capable of making an informed choice and it has to be confirmed by a second physician as well. Other requirements are the patient, not a physician, administrator the drug and the physician is required to provide counsel about the importance of participating in a hospice program, notifying next of kin of their intentions, and the terminally ill patient is permitted to change their mind after the request. The full text of the bill is on the ca.gov website here.