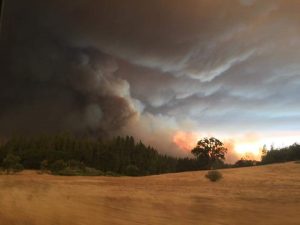 Update at 10 pm: Cal Fire spokesperson Nancy Longmore reports the evacuation shelter in Angels Camp at the Calaveras County Fairgrounds is moving, At this hour, the 200 people in the facility are packing up and heading to the new sight, which is the Valley Springs Veterans Hall at 8747 Pine Street. The hall number is 925-588-6694 for all inquiries. Longmore notes pets are not allowed at the hall.  Animals can be taken to the Calaveras County Animal Services at 901 Jeff Tuttle Drive in San Andreas. The number there is 209-754-6509.

Six homes and two out buildings have been destroyed. Cal Fire spokesperson Nancy Longmore expects that number to jump.  She says, “We’ve got 6,400 structures threatened. Were still going with eight structures destroyed, but they’re likely more that got lost. Those eight are the ones that are confirmed. We’re having a damage assessment team arriving tomorrow.”

There are 2,409 firefighters battling the blaze. Other resources include 246 engines, 63 fire crews, 8 air tankers, 17 helicopters, 40 dozers and water tenders. Cal Fire reports the top priority tonight for crews will be structure protection and getting more containment. “The big obstacles are working in the dark along with steep and rocky terrain,” says Longmore. “There’s always a threat of falling trees and stepping in burning stump holes.”

The flames moved rapidly and there was uncontrollable fire growth to the south and east throughout the day on Friday, according to Cal Fire.

Update at 7 pm: Cal Fire reports the acreage burned in the Butte Fire has grown to 64,728 while the containment has dropped to 5%.

Update at 6:30 pm:  PG&E is reporting more customers in Calaveras County are without power due to the Butte Fire. A total of 11,128 customers are without electricity this evening between Amador and Calaveras counties.  The latter has 2,339 residents without lights in the areas of Mokelumne Hill and Glencoe.  1,332 in the Mountain Ranch area and 426 east of San Andreas near Calaveritas. As reported earlier, in the areas of West Point, Rail Road Flat, and Wilseyville there are 2,210 customers without lights. In Amador County, the areas of Pine Grove, Volcano, and Pioneer have 4,974 customers still in the dark. The company has give an estimated repair time of Saturday at 8 pm.

Update at 4:15pm: Both CAL Fire and the Calaveras County Sheriff’s Office announced individually this afternoon that the community of San Andreas was being placed under a mandatory evacuation notice. CAL Fire spokesperson Nancy Longmore now says that the information has changed, and San Andreas residents are currently not under an evacuation order. There is an evacuation order east of Gold Strike Road, near San Andreas, going toward Mokelumne Hill. The other evacuation orders referenced earlier remain in place.

Update at 3:50pm: Governor Jerry Brown has placed his signature on a “State of Emergency” declaration for the Butte Fire. It allows for additional state resources and funding. The California National Guard will mobilize to support disaster response and relief efforts.

A special thanks to our community news partners for sending in photos. Pictures can be sent to news@clarkebroadcasting.com.

Update at 3:05pm: The Calaveras County Sheriff’s Office reports that Vallecito school district children have been evacuated and taken to the Calaveras County Fairgrounds. Parents will need to pick up the students at the evacuation center.

Update at 3pm: The Calaveras County Administrator’s Office reports that two Butte Fire town hall meetings are planned for Saturday afternoon. The first will run from 1-3pm at the Calaveras High School Gymnasium, and the second from 4-6pm in the Bret Harte High School multi-purpose room. All of the early referenced evacuation notices remain in effect.

Update at 2:50pm: CAL Fire reports that the Butte Fire has grown to over 50,000 acres and it is 10% contained. The evacuation orders listed below remain the same.

Additionally, Bret Hart Union High School District is evacuating and transporting students to the Calaveras County Fairgrounds. Buses will still take students to Copperopolis, but all other students must be picked up at the fairgrounds.

A special thanks to our community news partners for sending in photos. Pictures can be e-mailed to news@clarkebroadcasting.com.

Update at 1:10pm: The Calaveras County Sheriff’s Office has issued a “mandatory evacuation order” for several areas east of Highway 49 in Calaveras County. The Sheriff’s Office reports that it includes communities east of Highway 49, starting near Calaveritas, and stretching north to include San Andreas, and then continuing up to the Amador County line. In addition, the evacuation order includes areas like Mountain Ranch, Sheep Ranch and Cave City, and stretches over to Highway 4, starting at Murphys Grade, and continuing up Highway 4 to Avery. Once it gets into the Arnold area, it turns into an “advisory evacuation” notice. The Sheriff’s Office is encouraging residents in the communities listed to leave the area. Anyone that needs help with livestock or animals should call the Sheriff’s Office at 754-6500.

Update at 12:20pm: The Calaveras County Sheriff’s Office has issued an “advisory evacuation notice” for the community of Arnold. The Sheriff’s Office emphasizes that it is advisory at this time, and residents need to be prepared if the fire approaches.

Update at 10:45am: The Calaveras County Sheriff’s Office has just issued a mandatory evacuation order for the Oak Park Estates, in the unincorporated area of Calaveras County, stretching north to Mountain Ranch Road.

Update at 10:20am: Over 1,570 firefighters are now assigned to the Butte Fire burning in Calaveras and Amador Counties.

Eight homes have now been destroyed and 6,000 structures are threatened.

Columbia College is closing at 1pm this afternoon due to smoke.

The following Calaveras road closures are in place according to the CHP:

Cal Fire has released the following information about Mandatory evacuations:

CAL Fire says the following areas are under an evacuation warning and should be prepared to leave if conditions worsen:

Update at 10:05am: Sonora High School’s football game is being moved to Hilmar this evening, due to the smoke.

Update at 8:55am: Bret Harte High School’s football game tonight has been moved to Escalon. The JV game will start at 5:30 and the varsity game at 7:30. The venue change is due to concerns about air quality. That is the only venue change that has been announced to this point. Sonora High is still planning to play at home against Hilmar. Calaveras High will be on the road traveling to Modesto Christian and Summerville will play at Bradshaw Christian.

Update at 7:40am: CAL Fire has just released updated information about the evacuation warnings and orders due to the Butte Fire. It reads as follows:

Update at 7:10am: CAL Fire statewide spokesperson Daniel Berlant reports that the Butte Fire is now 31,974 acres. It remains 10% contained.

Original Story at 6am:  CAL Fire reports that a major challenge in fighting the Butte Fire is that much of the strategy has had to focus on structure protection, due to the number of nearby homes, and less on containing the perimeter.

The latest estimate is that the Butte Fire is 14,700 acres and 10% contained. A new size estimate will be released sometime after the morning briefing.

In Calaveras County, evacuation orders are in effect for the area of Highway 26, from Highway 49 to Railroad Flat, including all the side streets. Jesus Maria is also evacuated, from Highway 26 to Railroad Flat, including all side streets north of Jesus Maria and south to Doster Road. An evacuation warning is still in effect for all of Mokelumne Hill, and residents should be prepared to leave if conditions worsen.

PG&E also reports that thousands remain without electricity near the fire area.

Click here for a rundown of yesterday’s fire stories.

Click here to read a story about concerns related to the smoke.