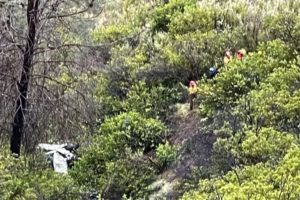 Coulterville, CA – The CHP reports that wet weather contributed to Monday’s Highway 49 crash in Mariposa County, where a father and son had to be rescued and traffic was stalled for several hours.

It was during the heavy rain on Monday around 11:15 a.m. when the collision happened on the highway south of Schilling Road in the Coulterville area. The CHP relayed that the driver, 51-year-old Scott Anderson of Rancho Cordova, and his 11-year-old son were in a 2005 Toyota 4Runner southbound at about 25-30 miles per hour. While heading into a left curve in the roadway, the father hit the brakes, but the SUV slid on the wet pavement. The vehicle went off the right shoulder and down a hillside, rolling over several times and nearly 400 feet down. The SUV came to rest on its right side in a dry drainage ditch.

As detailed here in an earlier report, both of the occupants had to be freed from the wreckage by Mariposa County Search and Rescue, CAL Fire and the California Department of Correction firefighters. The father and son sustained moderate injuries as a result of the crash and were separately transported to Modesto hospitals.

The highway was slow going for about 5 ½ hours while the rescue and then removal of the SUV took place. The CHP reports alcohol or drugs are not suspected to be a factor in this wreck.