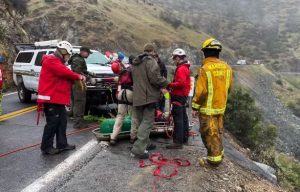 It is unclear when the crash actually happened, but the CAL Fire unit spotted a downed road marker during yesterday’s heavy rainstorm and got out to investigate. They were able to locate a vehicle that had gone off the highway and traveled 400-500 feet down the embankment.

The Mariposa Search and Rescue Team was dispatched and commenced a rescue operation along with CAL Fire and Mercy Ambulance. The heavy rain and steep terrain made the effort very difficult.

A father and son who were in the vehicle were both able to communicate with the rescuers and they were lifted up to the roadway and transported to hospitals in the Central Valley. No additional information has been released by officials at this time.