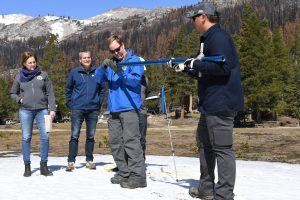 Sonora, CA – Walking onto a landscape with just patches of snow remaining, as can be seen in the image box pictures, California Department of Water Resources (DWR) staff conducted the fourth snowpack manual reading, raising drought and wildfire concerns.

The new readings at the Phillips Station in Lake Tahoe show that the state is experiencing one of the driest starts to spring in decades. The data recorded today showed just 2.5 inches of snow depth and a snow water equivalent of one inch, which is four percent of average for this location for April 1.

“While today usually marks the typical peak of the state’s snowpack, this year’s snowpack likely peaked in mid-January in the Northern Sierra. Most of the snow accumulation this year came from just two storms in December that were followed by the driest January and February on record in the Sierra, and unfortunately, March only brought a few weak systems,” reported Sean de Guzman, Manager of DWR’s Snow Surveys and Water Supply Forecasting Unit.

The snowpack is only 38% of average across the state, the lowest level since the end of the last drought in 2015 when California ended winter with only 5% of normal water levels in the mountains. It is also only the third time since 1988 that it’s been that low.

“Today’s snow survey reinforces what we’ve all observed – California just experienced the driest three months on record, and drought is worsening throughout the West,” California Secretary for Natural Resources Wade Crowfoot said. “Climate-driven water extremes are part of our reality now, and we must all adapt and do our part to save water every day.”

State water officials also noted that warmer than usual temperatures over the past couple of months have led to the snow melting and evaporating faster than normal. Without any significant showers in April and May, the state’s drought will deepen, and that could lead to stricter rules on water use and another devastating wildfire season. This chart shows the current reservoir conditions.

“The conditions we are seeing today speak to how severe our drought remains. DWR has been planning for the reality of a third dry year since the start of the water year on October 1,” said DWR Director Karla Nemeth. “While DWR has made significant investments in forecasting technology and other tools to ensure we make the most out of the snowmelt we do receive, water conservation will remain our best tool in the face of this ongoing drought and the statewide impacts of a warming climate. All Californians must focus on conserving water now.”

Much of the state and the U.S. West is in severe to extreme drought, as shown on the U.S. Drought Monitor. On Tuesday, Gov. Gavin Newsom signed an Executive Order directing cities and local water districts to implement stricter conservation measures, as reported here. Last May, he asked people to cut their water use by 15% compared to 2020 levels, but so far, consumption is down just 6%, as detailed here.