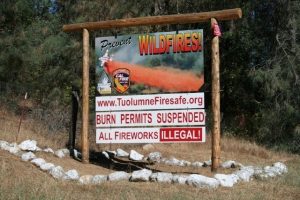 Sacramento, CA — Fire prevention fee bills have been arriving in mailboxes across the Mother Lode over the past several days. Although it has been two years since the annual charges were first mandated for over 800,000 rural Californians, it remains a hot topic.

As previously reported, when the fee was instigated in August 2012 it immediately sparked criticism. In 2013, Senator Tom Berryhill and Assemblymember Frank Bigelow issued a joint statement promoting appealing it during the confusion that entailed early billing attempts by the Board of Equalization on behalf of CalFire. Early last year, Board of Equalization Vice Chair George Runner called on Governor Jerry Brown to eliminate the charge, as it was enacted while the state was facing multi-billion dollar deficits.

Last month, the Howard Jarvis Taxpayers Association initiated steps towards filing a class action lawsuit over the charge, which, according to Runner, is now scheduled for an August hearing. The suit’s argument is, since collected funds are not used to provide an actual service, the charge is not a fee but an illegal tax.

“It doesn’t provide any hose, or firefighter, or helicopter — it goes for fire prevention programs to instruct people how to clear around their properties,” Runner states, further opining that rural residents are well aware of how to protect their homes and meet their insurance requirements. If legally recognized as a tax instead of a fee, Runner says it was passed illegally as the bill was handled through a simple majority vote instead of securing a two-thirds majority that a tax requires.

Runner indicates those interested in joining the effort to squelch the fire prevention fee may review the process on one of two websites set up to educate the public and provide the necessary forms. “The only folks who will get the money back will be those who protest it,” he explains. In order to qualify for the suit and to avoid penalties, residents should pay the bill before it is past due, he cautions. “It is important that people pay it. As much as we don’t like to,” he empathizes. “We believe that the system has to work out correctly and get this thing removed through the courts.” To access the Board of Equalization’s CalFire Fee protest page, click here. To view the Jarvis Taxpayers’ page on the topic, click here.