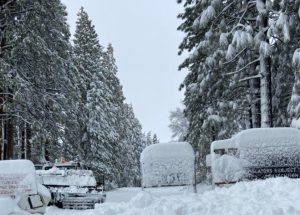 The closures are effective immediately. The centers were scheduled to be open until Friday. The reason for the early closures, according to county officials, is due to the power being restored faster than estimated in the area of the centers. As reported here yesterday, the centers were in the Arnold and West Point areas, where several hundred PG&E customers had lost electricity due to the stormy weather.

Even with the closures, county officials still warn that the aftermath of these winter storms can continue to pose a higher risk of car accidents, hypothermia, frostbite, carbon dioxide poisoning, and heart attacks from overexertion.