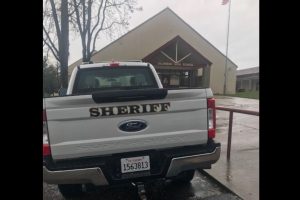 San Andreas, CA – A posting on social media threatening the Calaveras High campus in San Andreas caught the eyes of several concerned citizens who called 911 and others who did not, causing concern for sheriff’s officials.

As reported here yesterday, the school received the online threat around 11:20 a.m. Calaveras County Sheriff’s officials relayed after that dispatch also got several calls with “one person reporting they received notification of an “imminent or active threat.”

That sent deputies racing to the school. Sheriff’s spokesperson Lt. Greg Stark stated that out of an abundance of caution the school was placed in “secure” status or lockdown while deputies “systematically checked the school.”  He further detailed, “No weapons were located.  The lockdown was eventually lifted around 12:05 p.m.”

Lt. Stark outlined yesterday’s incident noting that so far detectives can confirm that school officials acted quickly and appropriately to ensure the safety of the students and staff and it was a well-coordinated effort with law enforcement. The exact contents of the threat are not being released, as the investigation is ongoing. Lt. Stark added, “The threats have been determined to have been posted more than two days before law enforcement or school notification.  Matters of threats to schools are taken very seriously. The investigation will take as long as necessary to complete.”

While many who saw the posted threat acted quickly, sheriff’s officials advised that several people had observed it within those couple of days without informing law enforcement.  Lt. Stark instructed, “Please if you see something, say something.  Posting open-ended speculation or misinformation on social media, as opposed to informing authorities, does not help the efforts to investigate and address any and all potential risks to the health and safety of our students and staff.   Waiting to see if the threat is real is no longer an option.”