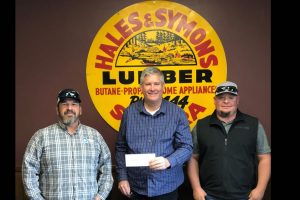 Shown receiving the check is Ron Hamilton who coordinated the benefit event held at Mother Lode Fairgrounds in September.

Sonora, CA – The  “Operation Washington Fire Relief” fundraiser has generated over $50,000 for those families that lost homes.

The event was held at the Mother Lode Fairgrounds in Sonora. It included a BBQ dinner and live music all for a $15 ticket price for adults. The total raised was $52,389.16 with $40,000 coming from the event. Another portion came from Pacific Ultrapower Chinese Station in Jamestown. Its employees, their families, friends, and Chinese Station parent companies Jamestown Group and IHI Power Services Corp all pitched in to present the Sonora Area Foundation Local Emergency Services Fund with a check for $12,389.16.

The Washington Fire ignited on the afternoon of August 26th in Jamestown along Highway 108 and Golf Links Road, as earlier reported here. It sparked a second fire off Stockton Street in Sonora. The two fires became one, destroying 19 structures, including 15 homes. It scarred 136 acres and human remains were also found in the burn scar, as detailed here.