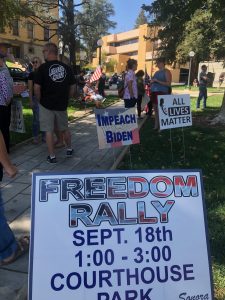 Sonora, CA–Over a hundred people were gathered at Courthouse Park in downtown Sonora to protest vaccine mandates and perceived government overreach. The event and its origins were recently a topic of KVML’s Newsmaker of the Day segment, which can be found here

The event began at 1 pm with an opening prayer followed by a star-spangled banner sing-along with group High Flutin.

The opening hour of the event was focused on various speakers, the first was David Dennis, an organizer of the Freedom Rally. He warned about the dangers of the digital age removing voting rights and the importance of visible rallies as a way for people to advocate what they believe in.

The second speaker Suzanne Cruz, founder, and CEO of Liberty Institute USA as well as a published author who shared quotes about the importance of freedom including this one from President Reagan “Freedom is never more than one generation away from extinction. We didn’t pass it on to our children in the bloodstream. The only way they can inherit the freedom we have known is if we fight for it, protect it, defend it, and then hand it to them with the well-fought lessons of how they in their lifetime must do the same. And if you and I don’t do this, then you and I may well spend our sunset years telling our children and our children’s children what it once was like in America when men were free.”

The third speaker was Darren Duez who is running for Sonora City Council. He said local government handling of COVID-19 has been very harmful to local businesses whe he said were left stranded by restrictive mandates and regulations. He encouraged the crowd to vote for him.

The speaking portion of the event was closed out by college professor and pastor Brook Moes who used a series of historical comparisons like the fall of Rome, to illustrate the importance of standing up for freedoms and letting your voice be heard.

The event had 1-2 counter-protestors who were masked and videotaping the event but even with some heated words at times the event stayed peaceful.