Worldwide Rally For Freedom In Sonora 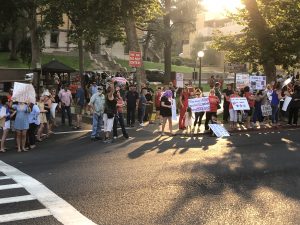 This Saturday Sept 18th, citizens of Tuolumne County will participate in their second Worldwide Rally for Freedom, joining over 400 other locations around the world taking a stand for medical freedom.

“Everyone is invited to join as we stand in unison for a family-friendly, peaceful gathering to have our voices heard and demonstrate our right to peacefully assemble,” said Nordstrom.

The rally will kick off at Courthouse Park in downtown Sonora at 1 PM with a non denominational prayer, live music, guest speakers, food vendors and more. The event will conclude around 3 PM.

According to Nordstrom, this rally is organized by numerous Tuolumne County residents, who are non-partisan, concerned citizens, who have galvanized around pandemic issues such as mandated vaccines, vaccine passports, informed consent, medical choice, and health freedom.

Nordstrom said, “The rally is specifically protesting items that are being implemented in California and/or are being considered including mandated experimental vaccines, vaccination passports, mask requirements (including children in schools), vaccinating children for the fall semester and future lockdowns.”

Worldwide Rallies for Freedom are planned in the USA as well as in over 400 locations including: Argentina, Australia, Canada, Denmark, England, France, Germany, Israel, Lebanon, New Zealand, Scotland, Switzerland, Uruguay.

“Please join us with a sign, give us a honk, wave, or stop and stand with us as we continue to push back against legislation that trespasses against every global citizen’s right to decide for themselves,” said Nordstrom. “Freedom of choice includes freedom of expression, religious practice, bodily autonomy, and movement. The time to stand is now and it begins here at home.”

For more information, email freedomsonora@usa.com or find FreedomSonora on facebook.