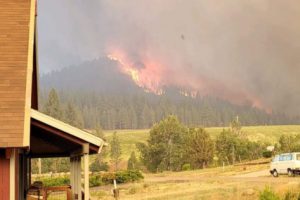 Markleeville, CA – Overnight the acreage on the Tamarack Fire burning near Markleeville more than quadrupled from 1,600 last night to 6,600 acres reported this morning, forcing residents from their homes.

The Alpine County Sheriff’s Office relayed that three structures have been lost in the blaze but did not have details on where or what types of buildings. They report no injuries and add that “all evacuation orders stand.” These include the areas of Markleeville, Grover’s Hot Springs Park and Campground, Shay Creek, Markleeville Village, and  East Fork Resort.

The U.S. Forest Service updates that two helicopters, a very large air tanker, single-engine air tankers, and Air Attack are on scene. The flames are burning in timber, brush and mixed conifer. They detail, “The fire is active on flanks and exhibiting high rates of spread. Ground and air resources have been working together to establish an anchor point to begin containment lines around the flank, or sides, of the fire. Currently, air tankers are using retardant to coat the vegetation to try to inhibit the fire’s spread.”

A Type 2 Incident Management Team has been ordered for this incident. There is a total of 50 personnel on-site. The blaze ignited by a lightning strike on Sunday, July 4th, and the fire had remained small until late yesterday (Friday, July 16) afternoon when the flames became active and a large plume of smoke could suddenly be seen in the skies, as posted image photos show and was reported here last night.