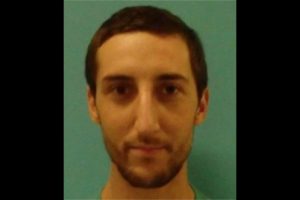 Update at 1:25 p.m.: Tuolumne Sheriff’s spokesperson Nicco Sandelin has released the identity of a Jamestown burglary suspect. He is 24-year-old Joseph Rizzuto of Sonora. He is still being sought for the theft.

As reported here Tuesday, deputies caught Rizzuto burglarizing a home in the area of Highway 108 near Hurst Ranch Road in the noon hour. He was able to escape capture, prompting a search of the area yesterday with several patrol vehicles visible and putting residents on alert. A couple of hours later Sandelin noted that deputies were not able to find Rizzuto and that he had left the area.

Currently, sheriff’s officials are asking for anyone that may have information on his whereabouts to call the dispatch center at 209-533-5815. Sandelin added, “Sheriff’s detectives are investigating the case, and more information related to the circumstances will be released at a later date.”

Of note, Ruzzito is known to law enforcement, he has three other previous arrests in the past several years. Two were in 2018, with the first in July and the second in October, both were drug-related. Then in February of 2019, he was arrested for grand theft after allegedly stealing several items from the Sonora Lumber hardware store on South Washington Street in Sonora, as detailed here.

Update at 1:15 p.m.: Tuolumne Sheriff’s officials have updated that a suspect caught burglarizing a home in Jamestown remains on the run.  Sheriff’s spokesperson deputy Nicco Sandelin tells Clarke Broadcasting that the suspect “was not located.”  He added that anyone who may have seen the suspect in the area of Highway 108 near Hurst Ranch or recognize him from this description given below to contact the sheriff’s office at (209) 533-5855. No further details regarding the burglary were available.

Original post at 12:30 p.m. written by BJ Hansen: Jamestown, CA — There is a law enforcement presence searching for a burglary suspect in the Jamestown area.

The sheriff’s office reports that a man was caught burglarizing a home and he took off running. He’s described as being a white male in his twenties with brown hair, a goatee, black shirt, black shorts and carrying a backpack. Officials are looking for him in the area of Highway 108 near Hurst Ranch. You may notice activity.