Report Looks At Future Options For Law And Justice Property 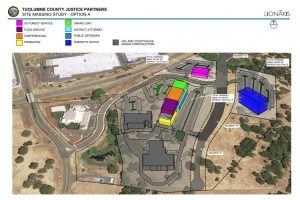 Sonora, CA — Proposals for how Tuolumne County could utilize three remaining parcels at the law and justice center campus are the focus of a new report.

There are various scenarios proposed, ranging in price from around $71-million to $93-million. The four different proposals include creating space for the District Attorney, Public Defender, Sheriff’s Office, US Forest Service, Probation, Grand Jury, conferencing and food service. All four include creating a large “Justice Partners Building” at the center of the property, and one to two other nearby additional buildings. For example, Plan A (image) would house Probation, District Attorney, Public Defender, Grand Jury, food service and conferencing in one building, and there would be separate locations for the Sheriff’s Office and US Forest Service.

The parcels would also have additional parking stalls. You can read the entire Law and Justice Center Programming Study by clicking here.

The county cites the reasoning behind the plan is that existing facilities for law enforcement partners lack aspects like separate entrances for staff and public, insufficient security measures, lack of storage space, and limited conferencing and parking areas.

If the board of supervisors decides to move forward with the concept, the county would need to create a plan to fund the project.

We reported in February that members of the board expressed openness to building additional facilities, but only if it makes good financial sense. The campus already houses the new jail, juvenile hall, courthouse and a transit hub.