What Comes Next At Law And Justice Center Campus? 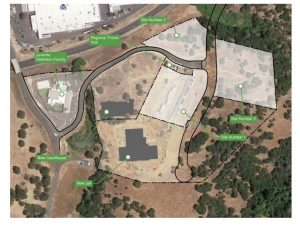 Sonora, CA — The first phase of projects at the Tuolumne County Justice Center property off Old Wards Ferry Road is wrapping up, and there are three parcels still available for potential use in the coming years.

The 48 acres were purchased by the county in 2009. They earlier considered seven sites, ranging from up near Standard Park to down near Jamestown.

The two years that followed focused on environmental reviews. and the initial infrastructure was installed by 2011. In 2012, 4.2 acres was sold to the State of California for the construction of a new courthouse. In 2016, thanks to a $16-million grant, the Mother Lode Regional Juvenile Detention Facility was built. In 2017, the Tuolumne Regional Transit Hub was constructed, along with the extension of Justice Center Drive. By 2019, work began on the new JH Dambacher Detention Facility and the state’s Superior Courthouse. Two separate grants helped fund the jail, and the courthouse money came fully from the state. The jail is now operational while the courthouse construction remains ongoing.

Deputy Administrator Frank says the focus is now shifting to “phase two” and what to do with the remaining three parcels. The firm Lionakis was hired to develop a planning document for the next phase, and she noted that they will return on March 2 to deliver a detailed presentation that will provide cost estimates for potential projects.

Previewing the plan, she says that many justice partners are currently being housed in buildings that were initially designated for other uses. For example, the District Attorney’s Office near Sonora High School was once a church, the Probation Department was previously the county’s library and the Public Defender’s Office was retail space. The buildings lack a separate entrance for staff and the public, needed security measures, sufficient meeting rooms, storage space for records, and desired parking for customers and staff.

Speaking about the preference to have the law enforcement partners close together, Frank says, “They are part of a system, a criminal justice system, and they work together. When you impact one of them, you impact all of them.” She said it also improves the customer experience by having the offices nearby.

Supervisor Anaiah Kirk said it will be important to see where the new board stands regarding the future of the site. He indicated that there are benefits to streamlining operations and getting out of existing leases, but he also has some reservations about starting up new projects.

Supervisor Jaron Brandon concurred, adding, “I think there is definitely some efficiencies that could be done as far as all of the justice staff working together, but the bottom line for me is cost, and how do we avoid potentially what could be a costly capital project, and how we finance that.”

Frank hinted that there could be things like a food court to increase revenue and help the project pencil out better financially.

If everything lined up favorably, with financing, Frank indicated the earliest any new construction would begin is probably 3-5 years, due to needed permits and other prep work.

Board Chair Ryan Campbell chimed in, “I don’t think I’ve ever heard from constituents that they want more public buildings, but they do want us to find ways to save money. I don’t know if building some new buildings out there will do that, as they are very expensive. But, if there are ways to get rid of some of the leased properties and incorporate them in a more condensed area, we should definitely look at that.”

Frank concluded, “The money that we need to budget every year to keep some of these older buildings together is another component to look at and whether it is economically feasible to stay the course or move forward with our plan.”

No action was taken at yesterday’s meeting, but again, the topic will be reviewed in more detail, with financial data, at the supervisors’ meeting on March 2.