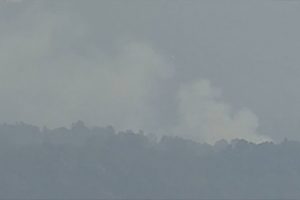 Sonora, CA — Columbia aircraft and ground crews were called to a report of a vegetation fire off of Tuolumne Road but found a wood chip pile on fire instead.

CAL FIre reports the blaze is in the 18600 block of Eagle Ridge Drive at the Green Works, LLC. drop off-center. It is a large mulch pile that ignited on fire and has created a large plume of smoke in the skies above and the area in general, as the picture in the image box shows. The aircraft has been released while a small ground crew will remain on scene working to put the fire out and make sure the flames do not spread to any nearby vegetation.

This is the same area where two debris piles caught on fire last year, as reported here. Then crews also monitored those blazes until they were extinguished.