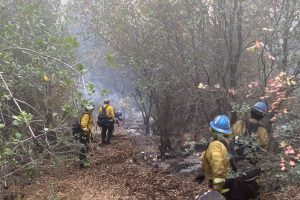 Update at 7:45 p.m.: CAL Fire reports that the Moc Fire is holding steady at 2,800 acres but there remains no containment. Dispatch details that more resources have arrived on the scene, allowing firefighters that have been on the front lines for 48 hours to get a break. There remain about 3,500 homes threatened with no total on the number of businesses or how many people have been evacuated. Currently, CAL Fire reports that no structures have been damaged.  There are over 130 evacuees at the Mother Lode Fairgrounds shelter along with many pets and livestock, according to Tuolumne County OES officials. Find all the latest evacuations and road closures below.

Update at 5:45 p.m.: An update from Mariposa County Sheriff’s Office on the Moc Fire detailing that all Mandatory Evacuation and Fire Advisements are still in effect and there are multiple road closures in the area.

Road Conditions: Open with no restrictions:

Greeley Hill Rd (J132) from Priest Coulterville Rd to Wagner Ridge. This includes all roads North to the Tuolumne County Line. Including:

This is NOT a Mandatory Evacuation, this is an advisement only of fire in the area, allowing you to prepare for a potential Evacuation Order should conditions change. No action is required at this time, however, if you feel unsafe please leave the area.

A statement from Tuolumne County OES officials regarding the large evacuation area can be viewed below along with the latest on the Moc Fire.

Update at 4:45 p.m.: The Moc Fire is holding steady at 2,800 acres with no significant growth. That is the word from the CAL Fire incident command overseeing the blaze. There remains zero containment.

CAL Fire is working in conjunction with the Tuolumne County Office of Emergency Services (OES) to provide updates on the fire. County OES coordinator Liz Peterson updates on the number of structures at risk, stating, “We don’t have an exact number. We’re looking at approximately 3,500 homes that are threatened, but more business and other structures on top of that number. We don’t have any reports on structure damage at this point.”

The image box shows a picture of the evacuation zone in both Tuolumne and Mariposa. Below is a statement from county officials regarding its significant size. Evacuation shelters are open at the Mariposa County Fairgrounds and the Mother Lode Fairgrounds in Sonora. Regarding the latter, Peterson details, “About 132 at the shelter. We still do have a significant number of people who are sheltering. We’re working to find rooms for them and avoiding congregate shelter.”

Due to a flood of calls to the sheriff’s office, Peterson encourages the public to take advantage of a non-emergency, and fire, line, that has been set up. It is 209-533-5151. She explains, “It will be providing any non-emergency information about the fire. Any updates that we have confirming evacuation locations and providing as much information that we can through those lines.”

The line will be answered from 9 a.m. to 7 p.m. and outside of those times a message can be left and they will call back.

Update at 3:15 p.m.: The Moc Fire that was sparked in the Moccasin area of Tuolumne County yesterday afternoon and is burning on both sides of Highway 49 remains at 2,800 acres with no containment. The map in the image box shows the large evacuation area. Tuolumne County Office of Emergency Services (OES) is addressing a large volume of questions they have received from the public regarding that sizable area. OES officials explain that is due to the number of fires throughout the state significantly reducing available resources. County officials target these factors for the decision to expand the evacuation orders late last night: the location of the fire, weather, limited resources, and the lack of ingress and egress routes for the Big Oak Flat and Groveland communities. They add that the top priority is the “preservation of life”, and to avoid a “catastrophe that has been witnessed in other communities.”

A map of the Mariposa evacuations can also be found in the image box pictures.

BJ Hansen wrote the below updates.

Update at 11:10am: CAL Fire has bumped the size estimate of the Moc Fire up to 2,800 acres. There remains no containment. All of the earlier evacuation orders and road closures remain in place.

Update at 9:17am: The Tuolumne County Sheriff’s Office reports that all of the earlier evacuation orders remain in place related to the Moc Fire. In addition, Wards Ferry Road is now closed from the Big Oak Flat side to Sonora.

Because of the high number of people calling the sheriff’s office, a non-emergency, and fire, line, has been established. It is 209-533-5151.

Update at 7:15am: Due to the Moc Fire, PG&E continues to cut power to thousands in the evacuation zone. There are 4,118 without electricity around Groveland, Big Oak Flat and Pine Mountain Lake. 11 customers are without power near Moccasin and 168 are without near Coulterville. PG&E is not stating when power will be restored. It is dependent on the fire suppression efforts.

Update at 6:40am: CAL Fire spokesperson Melinda Shoff reports that the Moc Fire is up to 2,500 acres and there is still no containment. More details about the fire can be found below.

Original story posted at 5:52am: Mocassin, CA — The Moc Fire burning in Tuolumne County continues to threaten homes and businesses.

The Tuolumne County Sheriff’s Office reports that Groveland and Pine Mountain Lake are still under a mandatory evacuation order due to the fire. It includes up Highway 120 to Big Creek Shaft Road. Mandatory evacs are also in place for those along Hwy 120 to Boneyard, Second Garrote, and Incense Cedar Trail, and everything West of Second Garrote, Cherokee Trail, and Yosemite Springs. The Mariposa County Sheriff’s Office has also issued a mandatory evacuation order for much of the Greeley Hill area, as the fire has been moving southeast. Evacuation shelters are open at the Mother Lode Fairgrounds and at the Mariposa County Fairgrounds.

For a map view of the evacuation zone, click here.

Westbound Highway 120 is open for people to evacuate. Smith Station Road to Highway 132 is another route. The Yosemite National Park gate is also open for evacuees needing to exit.

We’ll keep you updated as more information comes into the newsroom. CAL Fire will also release an update later this morning on progress made overnight by crews trying to build containment lines. The Moc Fire ignited on Thursday afternoon near Moccasin and the cause is under investigation. For a recap of events from yesterday, click here.