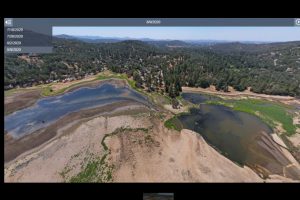 Sonora, CA – Excavators began digging into the sediment on the bottom of Phoenix Lake this week.

The large earth-moving equipment is part of Tuolumne Utilities District’s (TUD) Phoenix Lake Preservation and Restoration Project, detailed here. Hired to take on the lofty job was Steve Manning Construction of Redding and crews began the project in mid-July, as reported here. After a month of work, TUD updates that they are making progress with 74 dewatering wells and dozens of pumps removing surface and groundwater from the lakebed.

The lower water levels have allowed for the large earth-moving equipment to begin digging up the sediment. TUD details, two excavators with 6 cubic yard buckets began removing the silt this week. The goal is to haul out 5,000 to 10,000 cubic yards of sediment each day and put it on the adjacent Indigeny Apple Ranch Orchards to the north of the reservoir, according to TUD.

Phoenix Lake’s primary use is for drinking water, servicing Sonora, Jamestown, Scenic View, and Mono Village. It is an 88-acre water storage reservoir with a storage capacity of approximately 850 acre-feet (ac‐ft), which has dropped to only 600 ac‐ft due to the silt problem. It has also created an odor and taste issue in the water. That problem is expected to be solved when the project is completed, which is slated in October 2021, weather permitting.