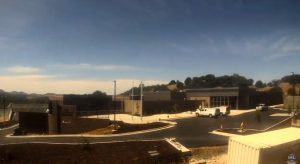 Thursday, the Tuolumne County Sheriff’s Office released about two minutes of footage showing the progress of Tuolumne County’s new Sheriff J.H. Dambacher Jail, showing its progress through construction phases from groundbreaking to its current, nearing completion state. Known as “The Black Hat,” its namesake served 24 years in office, the longest ever for a Tuolumne County Sheriff. Dambacher, considered to be one of the “finest sheriffs ever to serve” in the state, did so with a prosthetic leg.

To view the project footage, click the video link in the image box.

As we reported in great detail here last fall during Clarke Broadcasting’s exclusive tour of the multi-million-dollar facility as it was newly enclosed, the 63,000 square-foot 230-bed jail, will be a vast improvement for inmates and staff, providing much-needed jail and personnel space, integrating the latest technology for communications and educational programs, and onsite resources such as a medical area with a dedicated dental suite and a maintenance/shop facility.

While it was initially scheduled to open late last year, the soft opening was later amended to early spring. After a series of additional delays, including some COVID-19 pandemic-related, the latest plans call for construction completion sometime in the late fall or early winter.