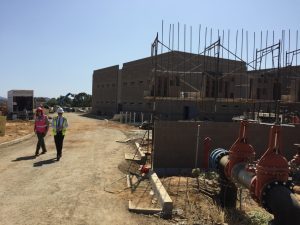 Located in the county’s Justice Center complex on Old Wards Ferry Road next to the Juvenile Detention Center and across from the future courthouse building that is newly under construction, the jail complex is now fully enclosed. Crews were busy finishing the roof and getting into installing walls and infrastructure. (Click into the image box for a slideshow and video.) Inmate-grown landscape materials from the county’s nursery at the old Jamestown landfill are slated for planting in late October and early November.

Moving forward under a budget of nearly $40 million, the 63,000 square-foot 230-bed facility is roughly about two months behind the original completion date of sometime in November or December of this year. Slated to be completed by Jan. 18, it will replace the county’s now decrepit 36,000 square-foot, 147-bed jail located in downtown Sonora adjacent to the county’s historic courthouse building.

Named after Sheriff J.H. Dambacher, whose two dozen years in office earned him the distinction of being the county’s longest-serving sheriff, the new detention center’s design, amenities, and offerings are anticipated to help create positive impacts for all involved: county inmates, staff and the community.

Size restraints at the current jail and changes in prison reform policies over the years have led to a population of higher-level offenders than the circa 1959 building was designed to hold. Sheriff Pooley shares that one of the chief consequences is that those convicted of lower-level crimes often do not serve much – if any – of their time, which inhibits rehabilitation and de-incentivizes arrestees from showing up for their court appearances, generating the issuance of more court warrants.

Pooley says inmate housing costs will increase once the new jail is up and running but not for the reasons many might think. “The old jail is more expensive to run per capita, due to its host of inefficiencies…once we are in this one, it will be more efficient and cheaper to run but the (overall) price will go up,” he states. “We will have more inmates because we will have the room to keep them longer and they will do more of their time.”

Tuolumne County CAO Tracie Riggs reports that the budget for the county jail for this fiscal year is recommended to be $7.1 million. The increase in cost includes four jail clerks hired in April, five new deputies to be hired next March, and an increase for utilities. The actual jail operations costs for the previous fiscal year came in around $6.4 million.

Sharing a Justice Complex-related side note, Riggs adds that the county recently became aware of a previously unknown county cost involving the new courthouse being built by the state; a required county facilities payment (CFP) to the state once it is up and running. “Every county with state-owned courthouses pays…my projections are that it will be a minimum of $200,000, based on what other counties our size are paying,” she estimates.

Pooley and his staff are clearly proud of the changes being made possible by the design and amenities of the new jail. “When we started talking about building a jail, the price tag was $90 million,” Pooley confides. “We whittled it away to $40 million and one thing that we are pretty proud of is that there is no fluff in this building. This is not the Taj Mahal. It’s the necessities…and I think we did a good job of spending the taxpayers’ money when it comes to how we designed it and the amenities that we have.”

Since it will be wired for wifi – a feature that was too expensive to retrofit the old jail for – the new facility will be equipped with remote real-time visiting stations for inmates based in their living areas and in the visitors’ reception area. Visitors will also be able to use their own electronics to connect from off-site locations.

Cooperative inmates who are involved in educational programs will have the additional option of using personally-issued tablet computers to conduct real-time visits with family and friends. Good-behavior and program performance incentives include the ability to download and watch movies and listen to music on the tablets. “Everything is geared so that if you behave well you will get this perk and it keeps the inmates calmer and quieter,” Pooley explains.

The new jail features numerous windows throughout, allowing for natural light to filter in. It provides two types of inmate housing; two-person cells that are eight to a unit, and 16-person dormitories that are two to a unit. Both connect to their own dayrooms and an outside yard area that is shared with another unit. Some cells are designed to meet ADA-requirements. Deputies work stations are located within eyeshot of each other and provide clear views of all the cells and yards.

There are also several dedicated program rooms that will allow expanded offerings for those working on high school or continuing education degrees, certifications, acquiring life skills, doing spiritual and other studies.

Once arriving at the new jail’s entrance, located along a spacious horseshoe driveway, arriving arrestees will be processed through an intake area twice the size of the current jail’s. Set up to provide cooperative booking amenities, such as a lobby with the ability to watch TV, make phone calls and privately use a restroom, it also has a series of sobering and safety cells.

It is all a far cry from housing conditions at the existing jail. Dark and artificially-lit, its learning space is limited to one program room and inmates get only three hours of weekly outdoor time on the rooftop. Anyone brought in for booking, including for lower-level offenses, is immediately placed in a cell because there is no other option.

Similarly depressing and described as an inhibitor to positive staff morale, current jail staff amenities are a small dark break room directly next to the employees’ toilet, and a basement locker area with leaky overhead pipes. Due to the current jail’s constrained location on a narrow street across from residences, staff must find street parking in the surrounding neighborhood areas, which over the years has led to a handful of dangerous encounters with former inmates.

The new jail’s employee areas are a source of enthusiasm for Pooley and his staff. The spacious break area will be equipped with a wall of windows that overlooks a vista of rolling hills and a 22-space secure employee parking lot. It will have hot and cold running water and a full complement of appliances and seating options. There is also an outside patio, a staff training room, and dedicated men’s and women’s restrooms with showers and locker areas.

Both the new jail’s kitchen and laundry facilities are double the sizes of the existing ones, designed to adequately cover needs should the facility be expanded in the future. The kitchen will have large coolers, freezers, dry storage, and a dedicated truck bay load-in area, which will help bring purchasing and handling costs down.

Appliances include commercial proofing ovens for baking bread and there are vendor offices, space for teaching inmates food service skills and procedures, and separate bathrooms for staff and inmates. The current jail kitchen prepares food for the juvenile detention center. So when the new kitchen assumes the task, deliveries will be much easier.

“With the funding we have we…also made a what we call ‘a hallway to nowhere’ that would hold another housing pod,” explains McCaig. She says that according to a 2015 needs assessment, the county could ostensibly plan for a 285-bed facility, and there are also the possibilities of future growth and or more funding.

Among the efficiency amenities is a large, dedicated medical area with a dental suite that will enable more expedient care and services for inmates. Pooley remarks, “It is all done in-house…saves us travel time and saves us from having to take felons outside of the facility.” The jail complex will also have its own onsite maintenance/shop facility.

According to Sheriff Pooley for budgetary and staff training reasons, once the jail is ready for inmates, it will initially run with a population of 150 through mid-July. As he points out, “Everything here you see is new…the doors, the mechanisms, all the safety screens…security electronics…so we want to keep the jail population down while we are training staff.”

He continues, “We have talked with the county, and we will probably go up to 160 to 175 in the first six months…then after that, we will slowly add. Now if we opened this jail to full capacity on opening day it is not going to be full, because we don’t have that many inmates.” He emphasizes, “But people will be sentenced longer –and we will be keeping people longer…and so the jail will gradually fill up.”