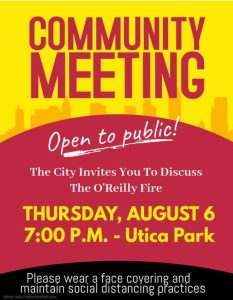 Angels Camp. CA – The public is invited to de-brief and hear about O’Reilly Fire firefighting and other community response efforts at a special community meeting at Utica Park

The ten-acre blaze that broke out last Friday evening behind O’Reilly Auto Parts off Main Street-Highway 49 near downtown Angels Camp remains under investigation, as earlier this week we reported here.

Angels Camp and Altaville-Melones Fire Chief John Rohrabaugh described the incident as a close call for the city. He tells Clarke Broadcasting that he and other city officials decided that a community meeting was important in order to provide an open forum for discussion with the fire and police chiefs, city administrator, mayor, and council.

The meeting will begin at 7 p.m. at Utica Park, located off Main Street adjacent to the visitors’ center in downtown Angels Camp. Plans are to cover what happened, address related topics, have a question and answer period, and give thanks to the mutual aid agencies and community members who jumped in to help with evacuations and home protection.

Chief Rohrabaugh shares, “We have had a lot of questions and people calling to praise our agency and CAL Fire…I think every fire department in the Calaveras County had at least one engine involved [across the incident] along with CAL Fire and their aircraft, and we needed that assistance.” He continues, “We rely on other resources when something large like this happens and want the community to understand it was not just our department doing the job. We basically work like one county even though we have ten different fire departments in the county. We want to make sure everyone understands that and knows they were there.”

Asked how the City was able to schedule a community meeting during the COVID-19 crisis, the chief says it was vetted through Calaveras County Public Health. “We consider this an essential meeting and are going to do everything we can to keep people safe.” To that end, masks are required to attend, and citizens will be advised to maintain a distance of six feet apart from those not in your own household. There will also be handwashing stations on site.

“We do want to get participation and we thought of the idea of a Zoom meeting but that some people would not be able to do that…I think it is essential in my opinion to do it while it’s fresh in everybody’s mind and allow that open forum, and keep it as safe as we can.”

Thinking part through the years, Chief Rohrabaugh confides, “I know in the time I have been in this area — since 1995 — I think this is probably the most significant [fire incident] that we had that had the most potential for major impact.”

While the downtown area was close to the fire area, the chief says, “I was extremely concerned for all the homes on the west side of Highway 49. We had the fire running up the canyon going towards all the homes moving upgrade — and that was a severe threat…if we had many more homes catch on fire or it had spotted over the initial street where the homes were impacted it could have been a complete tragedy.”

Focusing on the ridge area as an immediate concern and having CAL Fire air resources arrive when they did and drop retardant on the street near Crystal and Echo, where the fire was moving, helped save the day, he says. “All the homes on the ridge are so close together — all the streets are extremely small…it could have been completely horrific if people couldn’t get out and we couldn’t get in,” he recounts. “Obviously that area was built years and years ago…many of the homes are over a hundred years old and conditions, buildings, streets were different back then.”

As for discussion topics relating to future responses, the chief acknowledges along with emergency plans, there are ideas formulating for which officials want to have the community’s input and feedback. “I think we want to entertain the ideas that maybe some streets should just be one-way, maybe there shouldn’t be parking on certain streets…and to work forward with [the community] to assure we have a way to get them out of the area in the event of an emergency — and to be able to get us in at the same time.”

He maintains that city officials are in full listening mode. “We want to make this the safest small city around here to live in. We have such a small area and community I think if we work with our community we can make some strides.”