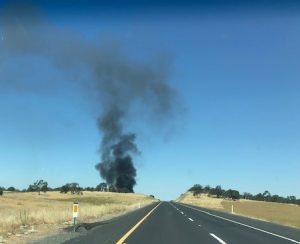 Keystone, CA – More details are being released regarding a deadly fiery collision Highway 108 this morning.

The CHP reports the vehicles burst into flames after the impact, sending a plume of black smoke into the sky, as can be seen in pics in the image box. The two-vehicle crash occurred around 10:41 a.m.near Tulloch Dam Road in the Keystone area of Tuolumne County, as earlier reported here. CHP spokesperson Officer Steve Machado reports a 21-year-old male from Fresno died in the wreck. His name is not being released pending notification of family.

The Fresno man was driving a 2019 Chevrolet Tahoe SUV eastbound on the highway, east of Tulloch Road at a high rate of speed. In front of his SUV was a 2019 Freightliner Cascadia big rig driven by 41-year-old Robert Ellis of Redding.  Machado relays, “The driver of the SUV attempted to pass the semi vehicle, but the right side of the SUV collided into the big rig causing the driver of the SUV to lose control. The SUV then traveled directly in front of the big rig where a second impact occurred.”

Machado adds that it was the second contact that caused both vehicles to catch on fire, as the semi T-boned the SUV, pushing it up the roadway until it flipped over onto its roof. Ellis was able to escape without any injuries. Unfortunately, the driver of the SUV was unable to escape, as Machado relays, “Multiple motorists attempted to extinguish and/or get the other occupant of the other vehicle out. However, they were unsuccessful.” He adds, “When cars get fully engulfed, it puts out so much heat that you just can’t get that close to it.”

The driver of the SUV’s identity is being withheld pending notification to the family. The eastbound lanes of the highway were shut down for about an hour, then officers directed one-way traffic for about another hour as tow crews removed the wreckage.