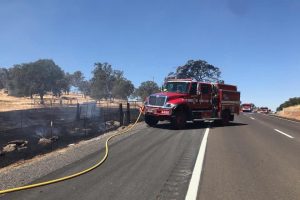 Update 1:30 p.m.: Traffic remains impacted in what CAL Fire has dubbed the “Wildcat Incident” on Highway 108 near Tulloch Dam Road involving a collision that sadly resulted in a fatality and also sparked about a one-acre grass fire. The crash involved two vehicles and blocked the eastbound lanes of traffic for over an hour. The CHP reports one of the eastbound lanes remains closed at this hour as tow crews are working to remover the wreckage. Westbound traffic is not impacted.

The below earlier stories were written by BJ Hansen.

Update at 12:15pm: CHP Officer Steve Machado says that one of the eastbound lanes of Highway 108 has reopened near a fatal crash that occurred at 10:40am and started a roadside fire. Continue to travel with caution in the area.

Update at 11:50am: The CHP reports that the two-vehicle crash that ignited a fire on Highway 108 near Tulloch Dam Road resulted in one fatality. The fire is fully contained. Be prepared for a notable delay if traveling eastbound on Highway 108 near the area referred to as the Rock Shop.

Update at 11:15am: A vehicle accident at around 10:40am on Highway 108 near Tulloch Dam Road ignited a fire that burned about an acre of nearby vegetation. The forward spread of the blaze has been stopped. The crash also caused some significant injuries to those involved, per the CHP, but details are limited at this time. The eastbound lanes of Highway 108, in the area often referred to as the Rock Shop, are blocked. You will want to avoid the area if possible. Westbound traffic is still moving.

Original story posted at 10:55am: Sonora, CA — Air and ground resources are responding to a report of a vehicle fire on Highway 108 near Tulloch Dam Road.

The CHP indicates that a couple of vehicles are involved in a related. Be prepared for activity in the area. Traffic is impacted in the area.