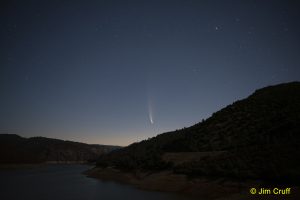 A local photographer captured a photo of Comet C/2020 F3, (NEOWISE), over New Melones. Comet Neowise is a newly discovered comet and the brightest comet visible from the Northern Hemisphere in 25 years. Jim Cruff sent Clarke Broadcasting these photos showing the comet’s stunning tail which he took this morning, Sunday, July 12.

NASA’s Neowise infrared space telescope discovered the comet in March, and it swept within Mercury’s orbit a week ago. Scientists involved in the mission said the comet is about 3 miles (5 kilometers) across. Its nucleus is covered with sooty material dating back to the origin of our solar system 4.6 billion years ago.

Cruff says “The comet is currently visible to the naked eye just before sunrise.”  The comet is headed in the direction of earth’s orbit, with the closest approach in two weeks. The comet will be visible across the Northern Hemisphere until mid-August when it heads back toward the outer solar system and won’t return for about 7,000 years.