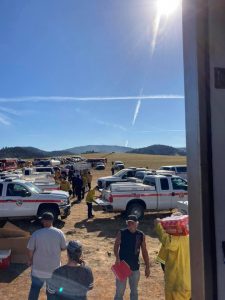 Salt Springs, CA — The size of the Walker Fire burning in the Salt Springs area of Calaveras County near New Hogan Lake remains 1,455 acres this morning.

Firefighters will continue to build and reinforce fireline on the eastern side of the fire today an area Kilgore says is hard to reach. She explains, “The area that they are working in now is one of the inaccessible areas. There’s really not a whole lot of roads there, so long distances of hiking and that kind of thing just get to the point where they can actually start working.”

What sparked the blaze remains under investigation. Currently, there are 800 fire personnel, 37 engines, 8 water tenders, 18 hand crews, and 6 dozers on the scene.