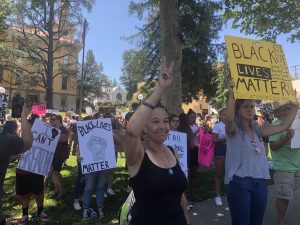 Sonora, CA – The Black Lives Matter Protest this Wednesday at the Courthouse Park in Sonora is costing the city a pretty penny.

With over a thousand people flooding the park, including protesters and counter-protesters, additional law enforcement from neighboring counties were call in to help keep the peace, as reported here. Sonora City Administrator Mary Rose Rutikanga details the costs, “When you have something of this magnitude…It’s usually done on overtime. So, we’re anticipating anywhere from $10 to $20-thousand of reimbursement expenses from those outside agencies.”

The large crowd also prompted city leaders to impose an overnight curfew and proclaim a Local State of Emergency, as detailed here.  Rutikanga explains that by enacting those, the city can seek to recoup up to 75 percent of those costs from the state through the California Disaster Assistant program. However, she adds, “It could take up to a year before we see those reimbursements.”

And the city is already dealing with other unexpected costs this fiscal year. “It’s a desperate time for cash flow with the coronavirus pandemic. It’s an unfortunate time, but we support anybody’s right to peacefully protest,” shares Rutikanga.

Without any approved funding from the state, these protest expenses will have to be added to the budget. “We’re looking at having to pull it from somewhere else at this moment. We have a little bit of areas that we can pull it from, but obviously looking ahead in order to close that gap we would definitely request the reimbursement from the state.”

The areas to pull it from according to Rutikanga does not include suspending services. Instead, the money will come from other areas that will be put on hold to make sure the cash is available to pay for protest costs. Rutikanga discloses, “There are purchases that can be put off from a services supply standpoint. Just to really monitor and be conservative on those expenses to make sure that we’re closing the budget in anticipation of those costs.”

Rutikanga is still looking to close the books on this fiscal year’s budget by the end of this month. She says by that time the city will have a better idea of what the budget’s ending cash fund balance will be and how much of these costs can be covered or what amount will have to be added to the 2020-21 budget. Rutikanga remarks, “The city will still need the exact costs to know how that will end up.”