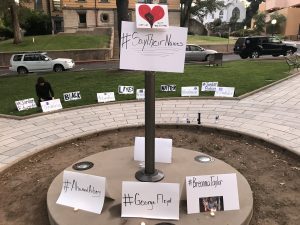 Sonora, CA — Much of the talk in Tuolumne County this week has been about a protest in downtown Sonora planned for today.

Protests following the killing of George Floyd have taken place across the state and nation over recent days, and some have been very peaceful, while others have resulted in violence. We reported earlier that many law enforcement officials will be on scene today, and Tuolumne County Sheriff Bill Pooley and Sonora Police Chief Turu Vanderwiel both indicate that they believe it will be a peaceful event. Click here to view a statement from Sheriff Pooley and here for a statement from Chief VanderWiel.

This morning, Tuolumne County Supervisor Anaiah Kirk has authored a new myMotherLode.com blog calling for the community to unite during this time. You can find it by clicking here.

Yesterday we reported that a Summerville High graduate, Morgan Wilkie, is a main organizer of the 1pm protest. She says the group plans to stand in solidarity against systemic racism. She explains the details of what will take place, here.

Last night there were many people gathered near the Willow Springs Clubhouse to discuss the protest. Clarke Broadcasting has learned it was a meeting put on by the State of Jefferson, and law enforcement officials were invited to come and speak to the group.

On Monday, there was a peaceful candlelight vigil at Courthouse Park in Sonora remembering the victims of racially charged brutality. Click here to view the story.

California’s 58 superintendents of schools have put out a joint statement about the killing of George Floyd, which you can find here.

We’ll pass along more information today as it becomes available.