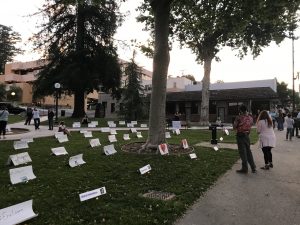 Sonora, CA — Following the death of George Floyd in Minnesota, a candlelight vigil was held in Sonora Monday night remembering 92 victims of racially related brutality over the past eight years.

The names were placed on cards at Courthouse Park with a candle in front.

The event was put on by the group Tuolumne County Indivisible. The President of the organization, Jessica Williams, noted that police brutality “is a national issue,” and stressed that they “love the local Sonora PD.”

She says though, “People of color in this community need to know that they have allies.”

The Vice President of the organization, Julie Gorgas added, “As white people we will never understand what people of color are going through, but we will stand next to them, and fight for their civil rights and protections.”

Gorgas noted that it was not a traditional protest because they wanted to allow people to social distance, and it was more of a “visual protest.” They encouraged people to simply walk or drive by in support.

Signs also read phrases such as “I can’t breathe” and “enough is enough.” You can see images from the protest by clicking on the photo box.

During the eight o’clock hour there was a mix of people both voicing support by stopping by Courthouse Park, or honking, and there were also some people driving by and yelling out obscenities aimed at the vigil.

We reported earlier tonight about another protest is scheduled for Wednesday in Sonora, click here to view the story.