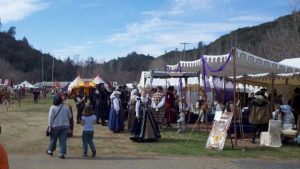 There are several events and fund raisers going on this weekend but starting tomorrow the Sonora Celtic Faire welcomes all to the Mother Lode Fair Grounds. Patrick Michael Karnahan, Founder and CEO of the Sonora Celtic Faire’s Founder was also a KVML “Newsmaker of the Day”. The 34th Sonora Celtic Fair begins at 9:30 a.m. tomorrow, and opens on Saturday and Sunday at 10 a.m. at the Mother Lode Fairgrounds. Friday is family day when many school children visit to learn from hundreds of costumed performers and craftsmen re-enacting Celtic History, music, stories and dance. In the arena will be the International Ultimate Jousting Championships. The entertainment includes music on several stages, armored combat, juggling, and dancers. Details about the entertainment are on their website here.

Saturday is the Sonora Elks Lodge Crab Feed, if you have your tickets, review the event listing here for more information.

The University of California Cooperative Extension (UCCE) will host another garden day, information featured includes ‘Giving your Seeds a Great Start’ and ‘Grapevine Care & Maintenance.’ There is no cost to attend Open Garden Day or to tour the garden, more details are here.

The soccer team Sierra United will wash your car to raise money for their team Saturday. Details are here.

Support the communities of  Hornitos and Mariposa at an enchilada dinner as detailed here.

In Coulterville on Saturday view the new documentary, Miwuk, about the Southern Sierra Miwuk Tribe. Coulterville’s IOOF on Main Street is showing the movie after a sold-out crowd of the initial screening. The Northern Mariposa County History Center is sponsoring this second screening. The film features the personal stories of 7 people and encompasses their tribe’s effort to be recognized by the Federal Government, which began in the 1800’s and still continues. Produced and edited by veteran Warner Bros. television editor, Bill Lowe, the film is not recommended for young children. After the film, there will be a discussion period with members of the Southern Sierra Miwuk Nation. There will also be an opportunity to sign a petition supporting the tribe’s decades long efforts to gain federal recognition as an American Indian Nation. Tickets and more details are in our event calendar here.

Murphys Creek Theatre is performing ‘Proof’ Friday night and Saturday and Sunday. The event listing is here. Sierra Repertory Theater is performing Camelot at the Fallon House in Columbia as detailed in our Theatre section here.