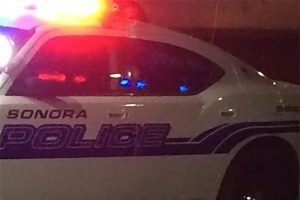 Sonora, CA – A suspect that allegedly attempted to cash a forged check found in a stolen wallet even tried to pass himself off to Sonora Police as the man on the photo ID inside.

Arriving at the SaveMart grocery store on Stockton Road just after 7 p.m. on Tuesday for a report of someone trying to pass a bad check, an officer contacted the suspect that staff had detained. He was 37-year-old Jason H. Parker of Modesto and he actually had two checks from two different restaurants worth several hundred dollars on him, according to Chief Turu VanderWiel.

Parker told the officer that he worked for both eateries and then pulled out a photo ID that matched the name on the checks. Chief VanderWiel says that’s when the officer determined something was amiss, “There were similarities, but if you looked closely it was pretty clear that it wasn’t him. The officer followed up and called the person [on the ID]. He said that wallet was stolen out of his car several weeks prior in Modesto.”

It was also determined that Parker was not an employee of either restaurant. He was arrested for check forgery, attempting to pass fictitious checks, and for providing false identification to a peace officer. The Chief says charges related to the stolen wallet are also being sought.