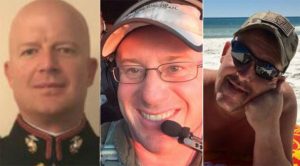 Update at 6:30 a.m.: The three U.S. firefighters killed in the C-130 Hercules Air Tanker crash while battling Australia’s wildfires have been identified. The firefighters that died are Capt. Ian H. McBeth of Great Falls, Montana; First Officer Paul Clyde Hudson of Buckeye, Arizona; and Flight Engineer Rick A. DeMorgan Jr. of Navarre, Florida. Further information including a statement from Governor Gavin Newsom is below.

Original post at 5:45 p.m.: Sacramento, CA – There is a connection to California regarding the C-130 Hercules Air Tanker that crashed while battling the massive Australian wildfires.

Flags are at half-staff in California and at the CAL Fire station at McClellan Air Force Base in Sacramento to mourn the loss of three American firefighters killed.

Governor Gavin Newsom issued the following statement: “Jennifer and I are heartbroken to learn of the air tanker crash in Australia that claimed the lives of three heroic American firefighters. We extend our sincere condolences to the families of the crew, their friends and loved ones, and our own CAL FIRE family who worked, fought fires, and trained with the crew of Tanker 134. This tragic accident reminds us all of the too-high cost of the scourge of wildfires, as well as the sacrifice of first responders from around the world. California and Australia, already united by the deadly threat of wildfires, now grieve this tragic loss together.”

The C-130 Hercules (N134CG) plane that crashed is pictured in the image box and it was taken at McClellan Air Force Base during an event Governor Newsom hosted with former Governor Arnold Schwarzenegger in August of last year, according to the governor’s office. CAL Fire reports that this C-130 was used as a training platform in 2019 for future pilots of the CAL Fire C-130 program and was instrumental in 2019 in battling the devastating wildfires across California, including the Kincade Fire in Sonoma County, which was the largest wildfire in the state last year.

CAL FIRE Chief Thom Porter. “Our heartfelt condolences go out to the family, friends, and colleagues of the crew from Tanker 134 that were lost during a tragic crash while battling the devastating Australia fires. CAL FIRE stands with you during this difficult time. Although they did not wear the CAL FIRE patch, they were equally committed to protecting lives and their loss is felt deeply across the entire aviation community.”

The Lockheed C-130 Hercules air tanker is owned by Coulson Aviation based in Alberni, British Columbia, Canada. It was operating on contract with Australia’s Rural Fire Service and crashed on Thursday in the Snowy Monaro area of New South Wales during a firefighting mission. Australian authorities are investigating the incident.