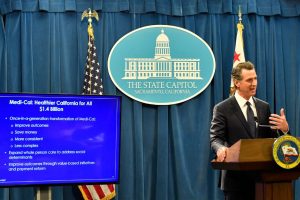 Update at 4:15 p.m.: Mother Lode Republican State Senator Andreas Borgeas reacted with concern for the big price tag for Governor Gavin Newsom’s proposed fiscal year budget. As announced today by the governor it adds $5 million in spending and that expenditure is a big problem charges Boreas, who issued the following statement:

“The Governor’s proposed budget increases spending to an alarming $222.2 billion,” said Senator Borgeas. “We have seen California’s $21.5 billion surplus in Fiscal Year 2019-20 drop to an estimated $4 to $7 billion surplus in FY 2020-21, according to the Legislative Analyst’s Office (LAO) 2020 Fiscal Outlook. Should current trends continue, California may enter a recession in the next fiscal year. Therefore, California’s fiscal approach should be prudent and responsible, remembering that investments in infrastructure, disaster preparedness, transportation, housing and water are our most immediate concerns.”

In regard to wildfires, climate change and emergency preparedness Borgeas stated:

“The Governor’s investment in hiring more firefighters is a positive step towards reducing the threat of wildfires. However, protecting Californians from wildfire threats must also include forest management, home hardening, California Environmental Quality Act (CEQA) streamlining for emergency preparedness, and greater oversight of Investor Owned Utilities. The state’s record revenues can help communities in wildfire prone areas by offering tax credits for home hardening, forest management, and the reissuance of insurance policies.”

The Democratic governor submitted his 2020-21 State Budget proposal to the Legislature on Friday. Newsom defends against criticism from national naysayers in the wake of devastating wildfires, widespread power outages, and a soaring homeless population. He argues that California will continue to lead the nation when it comes to innovation.

“California’s economic growth has fueled the nation’s economy. As 2020 begins, California’s economy is the strongest in the nation and the fifth-largest in the world,” stated Governor Newsom. “We’re eliminating debts, paying down pension liabilities, growing our reserve funds – the largest ever at $21 billion – and one out of every seven new U.S. jobs is in California.”

The governor is seeking a continued progressive agenda. His proposed budget increases spending by 2.3% or about $5 billion but also boosts state reserves for any economic downturn.

“Despite the progress we’ve made, there are deep, structural challenges that threaten our state’s future and demand our urgent attention. These problems – our widespread affordability crisis, expanding homelessness crisis and catastrophic wildfires – have been decades in the making and won’t be fixed overnight. California is doing more than ever to tackle these challenges and this budget builds on that work with new investments and ideas to take on these longstanding issues.”

“On the issue of homelessness, we’re investing over a billion dollars yet again to address the issue that defines our times,” according to Newsom.

The governor also wants an expansion of education programs including giving $20,000 stipends to teachers at high needs schools for four years to the tune of $100 million. Saying it is worth the money, he adds, “It’s not that complicated. Train your teachers, make them the best, the brightest, incentivize.”

Another area funded in his budget extends health care to 27,000 older low-income immigrants who are in the country illegally.

After releasing his draft budget, the California Farm Bureau Federation praised the governor for following through on his pledge to elevate issues affecting its members. President Jamie Johansson stated, “The governor’s budget reinforces his commitment to rural California. The proposals contained in his draft budget reflect his concerns for the future of farmers, ranchers and the rural areas they support.”