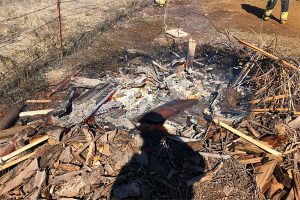 Burn pile that escaped and ignited a half acre fire

Sonora, CA – CAL Fire has a warning for those planning to ignite a debris burn – don’t let your guard down.

With no permits currently needed, fire officials warn to be careful not to let the flames escape and spark a wildfire. CAL Fire TCU spokesperson Emily Kilgore cautions, “There have been a couple of escaped debris burns.”

The pictures in the image box are from one of those Mother Lode blazes. The landowner lost control of the flames due to no clearance around the pile, according to Kilgore. Firefighters were able to quickly extinguish the blaze, but only after the flames had scorched a half-acre of grass.

Luckily, the other fire was also knocked down fast and contained at a small spot fire, but as with any fire, the potential for the flames to take off is always present. Kilgore also suggests, “Just because we’ve had wetting rains and things seem to be conducive to leniency when burning we still need to be aware that fires can escape, so take that into consideration when choosing to burn.”

A motto offered by Kilgore to keep in mind is that “just because you can burn doesn’t mean you should.” She says the public should follow these simple rules: