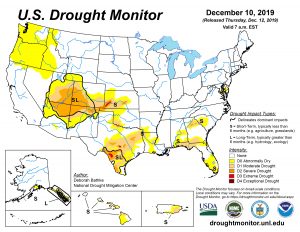 Sacramento, Ca — Most of the state, including the Mother Lode, is now officially drought-free for now.

According to the U.S. Drought Monitor, just about two months ago and six weeks into the current water-year that annually begins on Oct. 1, over 80 percent of the Golden State was considered as abnormally dry because of above-normal temperatures and a lack of precipitation. As recently as last week, the area increased to cover 85 percent of the state.

However, a deluge of precipitation has since shrunk the percentage to a small area located on the eastern Oregon-California border.

Officials note that this year was the tenth straight one in which the state hit abnormally dry levels since 1895 when records began being kept. The category is one step before moderate drought conditions and also indicates soils are dry, snowpack minimal and fire danger high.

Most of the major northern California reservoirs are currently sitting at well over 100 percent of their historical averages for this time of year.

At 82 percent of its capacity, New Melones is at relatively the highest level and at 144 percent of its historical average. Don Pedro, at 80 percent of its full capacity is now measuring at 122 percent of its average for this time of year. To view an infographic of the latest reservoir levels, click into the image box.