Pitching In To Build Swine Arena And Cattlemen’s Park 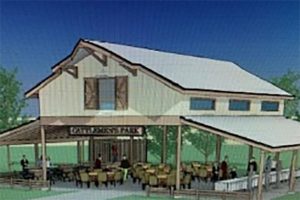 Angels Camp, CA – Funds area needed for two projects slated for next year at the Calaveras County Fairgrounds off Highway 49 in Angels Camp and one way to contribute could result in naming rights.

The Calaveras County Friends of the Fair and the Junior Livestock Committee are each embarking on the construction of two buildings that will cost around $100,000 each.

That amount has already been raised by the committee for a swine show arena. However, Calaveras Fairgrounds Executive Director Laurie Giannini says the funds are needed for many projects on the grounds. To extend those funds, naming rights to the arena are being offered. She explains there are two ways to contribute, “One would be just to pay for it completely and then we would call it that for the rest of time. The other one would be to support it substantially over the next couple of years and we would name it over a twenty-year period.”

The Cattlemen’s Park, a beam and post structure shown in the image box, is a friends of the fair project that has acquired about $20,000 in funding. Giannini shares most of that has been raised through memorial contributions.

Giannini adds that the swine area will be completed by the 2020 Calaveras County Fair and Jumping Frog Jubilee, which runs May 14 – 17, but only the concrete slab may be done for the Cattlemen’s Park by that time, according to Giannini.