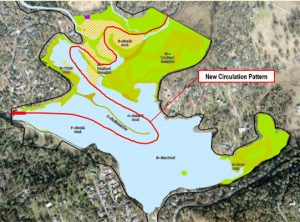 Sonora, CA — The Tuolumne Utilities District (TUD) Board has voted to spend another nearly $100,000 on the Phoenix Lake Preservation and Restoration Project to finish the work.

After a presentation by District Engineer Erik Johnson regarding the project, which will restore 250-acre feet of lost capacity by removing sediment and establishing better circulation among other benefits, the board voted unanimously in favor of the additional cost at Tuesday’s meeting.

A total of $99,935 was approved for a consultant to finalize some items. Johnson noted that about a third of those funds will be spent on acquiring a critical permit from the US Army Corp of Engineers before construction can begin. He added, “There have been some unforeseen scope of work involved on a project that now we’re approaching four years later. For them to come back and ask for this budget augmentation, I think is very justified.”  Click on the chart below for a breakdown of the additional costs:

As reported here Monday along with specifics on the project, the district is nearing a crucial deadline and must receive the permit within the next few months or risk losing some grant funding awarded for the project.