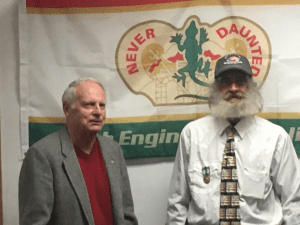 Sonora, CA — A Tuolumne County Veteran has received the Humanitarian Service Medal for his efforts with the US Army in the late 1970s.

A special ceremony was held last week for James Lipscomb at the Veterans Service Office on Hospital Road in Sonora. About 40 years ago he was deployed to the Eniwetok Atoll, a group of islands, in the Pacific Ocean.

Tuolumne County Veterans Service Officer Debora Kay Esque relays, “Eniwetok was the nuclear testing site and was a part of the US Pacific Proving Grounds.  Forty-three nuclear tests were fired at Eniwetok from 1948 to 1958.  During this deployment James worked on the cleanup from our ATOMIC Bomb testing site.  It’s important to note that it’s projected that the majority of the atoll will not be fit for human habitation until the year 2026-2027.”

She adds, “The Humanitarian Medal is presented as an individual service medal.  The activities in which the Humanitarian Service Medal will be authorized are designated by the United States Department of Defense.  These activities include natural disaster relief, evacuation of non-combatants from a hostile area, or humanitarian support to refugees, as examples.”

Congressman Tom McClintock’s District Director Rocky Deal was on hand to present the medal to Lipscomb.