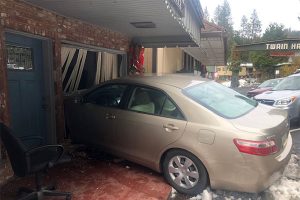 Vehicle into building in Twain Harte

Update at 3:40 p.m.: The CHP reports that the sedan that went through the plate glass window of a business in Twain Harte has been removed and first responders have cleared the scene. No injuries are reported in the crash. Drugs and alcohol are not suspected in this crash. Further details on the collision are below.

Original post at 3:15 p.m.: Twain Harte, CA — First responders are on the scene of a vehicle that crashed into a building in Twain Harte.

The CHP reports that a 2007 Toyota Camry smashed through the plate glass window at the Twain Harte Chiropractic office located in the 22900 block of Joaquin Gully Road, as can be seen in the pictures in the image box. Eyewitness Alison Daniels a realtor at the Century 21 office tells Clarke Broadcasting she heard a loud bang and went running outside to discover a shocking scene. “I saw a little old man in the driver’s seat and the car was still running. I told him to turn off the car because it was smoking. I asked him if he was okay and then I called 911,” recounts Daniels.

The driver is 91-year-old Richard Alarcon of Soulsbyville. Sonora CHP Unit spokesperson Steve Machado describes what caused the crash, stating,  “He was making a parking maneuver when his foot slipped off the brake and actually hit the accelerator and the car flew into the building.”

Daniels adds that after she got Alarcon out of the vehicle, she checked inside the building. She shares, “I peeked into the building and chiropractor was in there but he was in the very back. I waved at him and he wasn’t hurt. There was nobody else in there, thank goodness.”

Machado relays that at this time it is unknown if drugs or alcohol played a factor in the crash and the incident remains under investigation.

A special thank you to our community partners Alison Daniels and Nick Robinson for the pictures and video.