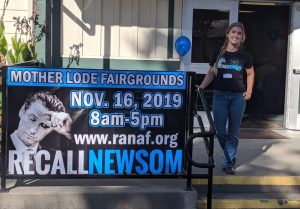 Kimberlie Magney Outside A Recall Event At the Fairgrounds

Sonora, CA — As part of a statewide effort, at least around 1,000 signatures have been collected in Tuolumne County to recall Governor Gavin Newsom.

Signs were up promoting a recall event held last Saturday at the Mother Lode Fairgrounds, and for an earlier event took place in October at the community room in the Tuolumne County Library.

Kimberlie Magney, 34, is the Tuolumne County coordinator of the recall and says 501 signatures were collected at the fairgrounds and 460 at the library. She says the statewide recall is being organized by the organization Restoring America Now (RAN), created by Erin Cruz. The group is collecting signatures across California’s 58 counties and the petition has been cleared through the Secretary of State’s Office.

Asked about the reason to recall Governor Newsom, Magney cites rising homelessness, high taxes and regulations, but argues the main reason is, “He took a lot of what we voted on (ballot measures) and is overturning voter decisions.”

She cites the Governor ending the death penalty despite a 2006 ballot measure supporting capital punishment, and new rent control measures despite voters being opposed to the idea in a Proposition 10 measure last year.

Magney stresses that the recall is a non-partisan effort and people of all age groups and backgrounds have been signing the petitions. She notes that at least one other event is being planned locally after the first of the year.

In order to place a recall on the ballot there must be signatures from 12-percent of voters taking part in the previous election, which equates to around 1.5 million. The organization is shooting for two million to account for any invalid signatures. For Tuolumne County, the local group is hoping for around 4,800 signatures.

Magney says the current number in Tuolumne County could be over the roughly one thousand that she and her group of volunteers have personally collected, noting that there was also an event organized by others in Twain Harte in October, in addition to mail-in signatures.

Governor Newsom addressed the recall effort briefly last month, stating to reporters, “I honestly haven’t had a chance to pay much attention to it,” citing that he was focused on bills and legislation on his desk that needed attention.

The California Secretary of State’s Office reports that there have been 51 attempts in the state’s history to recall a governor, of which, one was successful. In 2003 Gray Davis was recalled and replaced by Arnold Schwarzenegger.