A Three-Way Tie For First Place And A Nail Biter 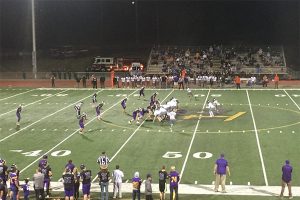 After their third loss in league play against Amador, the Summerville Bears traveled to Bret Harte to take on the Bullfrogs.

Starting the game off strong, Quarterback Jaden Brochini threw a 60-yard pass to Wide Receiver Titus Shirley. Unable to score a touchdown on this drive, Kicker Ian Henley and the bears set up for a field goal. A bad snap sent holder Wyatt Frankenstein scrambling out looking for a pass. Frankenstein unable to find a receiver throws the ball away, turning it over inside the twenty-yard line. From there, it was a game of defense.

Each team punted the ball three times in the first half. All-around player, Chase Ryan, had multiple sacks, defensive plays, and runs to boost the Bears even though the first half score was tied at zeros.

The second half started with the Bret Harte controlling the ball for eight minutes. Finally scoring, the Bullfrogs went up by only six because the extra point attempt was blocked. Within 30 seconds of the Bears getting the ball, Brochini threw another 60-yard pass but it was caught by Alliou Tippit who was brought up from junior varsity. Tippit traveled into the end zone and Kicker Hayden Fleming bailed the extra point to go up seven to six. With that score, it ended the third quarter.

Both teams returned to punting in the first half of the fourth quarter. Bret Harte took advantage of one drive and finally scored with two minutes left. Failing at the two-point conversion, the Bullfrogs were up 12 to 7.

The Bears fielded the ball and marched down inside Bret Harte’s territory but Brochini got sacked to turn it over. With just over a minute left, the Bullfrogs tried running the clock out, but the Bears defense conquered the line and stopped them short of a first down, forcing the frogs to punt.

As Bret Hart dropped back to punt, Chase Ryan flew in, hurdling over the Bullfrogs line, and blocked it! Brochini scooped up the ball and scored with 20 seconds left! Summerville attempted a two-point conversion to go up by three and it was converted. With 20 seconds to go and the Bears winning 15-12, they kick it off to Bret Harte. As the Bullfrogs looked to pass, Freshman Safety Braylon Leveroos read the offense and picked off the pass to end the game.

The Bears ended up defeating the Bret Hart Bullfrogs 15-12 in the most thrilling game of the year. Next week the Summerville Bears will play at home against their cross-town rivals, the dreaded Sonora Wildcats.

All good things must come to an end including the Sonora High Mother Lode League undefeated streak, as the Wildcats lost 49-14 to Amador in Sutter Creek Friday night.

The Buffaloes opened the first quarter gunning and scoring 28 unanswered points in the first half on four separate passing plays. Sonora would get the ball with less than a minute remaining before halftime and Quarterback Nick Crockett would connect with a leaping Gabe Milbourn from 28 yards out and the Cats would go into to half time down 28-7.

To open the second half, the Wildcats would receive the ball and set themselves up with a decent field position on the return. As Crockett dropped back to pass an Amador defensive player would rush from the blindside and knock the ball away. In a turn of bad luck, a bounce off the turf would land in the outstretched hands of a Buffalo defensive lineman and he would rumble 27 yards for a score. The extra point would extend their lead 35-7 early in the third quarter. The Amador air game would add another touchdown on a 20-yard pass and the end of the third would see the score Amador 42, Sonora 7.

In the fourth quarter, Amador took advantage of every possible second as they ticked off the scoreboard, waiting until the last possible moment to run offensive plays. The Buffalos’ would add another score from 2 yards out and with the point after it was 49-7. Sonora’s Crockett and Milbourn would hook up again from 10 yards out and the extra point would add the final score of the ball game, but not enough as Amador wins 49-14.

With Sonora beating Calaveras, Calaveras beating Amador, and Amador beating Sonora there is a three-way tie currently for first in the Motherlode League. Next week is In-County Rivalry week, as Amador plays Argonaut, Calaveras plays Bret Harte and Sonora travels a short distance to take on Summerville from Thorstead Field. All three games could affect the CIF Sac-Joaquin Section playoff picture which will become clearer next week after all games have been completed and seeding can take place.