Along One Road Grow Busters Take Out Cluster Of Illegal Grows 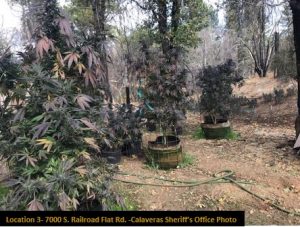 Calaveras County Sheriff’s spokesperson Sgt. Greg Stark tallies up that the Marijuana Enforcement Team (MET) served the search warrants at three separate locations in Mountain Ranch that were neighboring properties to each other.

While no suspects were located at either property, evidence was collected for further investigation. Evidence from the second location appeared to connect it to the third search warrant location, also on South Railroad Flat Road.

Here, deputies eradicated 170 growing marijuana plants and collected just over 824 pounds of processed marijuana. Also seized were two firearms; a semi-automatic handgun, and a rifle with an altered pistol grip. (To view evidence photos, click into the image box slideshow.)

While at the third site, deputies arrested ten adults and Child Protective Services took four children into protective custody after locating eight of the adults and one juvenile actively processing marijuana in a converted garage. The other two arrested adults were located in the primary residence along with several children.

Along with those charges, Enfain Ortega Cruz, 54, and Yolanda Villalobos Vareaz, 51 of Aquila, Michoacán, Mexico, were arrested for willful cruelty to a child which could result in injury or death and conducting immoral acts in a child’s presence.

In addition to all the above charges, Juan Lombera, 53, and Adelaida Villalobos, 33 of Mountain Ranch also face charges of illegal marijuana cultivation, possession of marijuana for sale, and maintaining a drug house.

Approximately $1.6 million is a rough street value estimate of the total plants and processed marijuana seized from these outdoor grow operations.

Stark encourages anyone with knowledge of illegal marijuana operations to call the Sheriff’s Anonymous Marijuana Tip Line at 209 754-6870.