A Homecoming Win and Three Losses 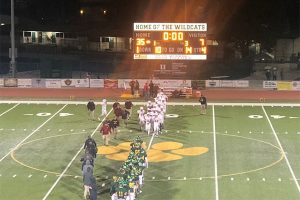 Sonora wins its Homecoming against Calaveras

Two Mother Lode League undefeated teams met Friday Night at Dunlavy Field. The first quarter was a slugfest with both teams going back and forth but neither able to put points on the scoreboard.

Sonora took the opening drive of the second quarter and drove down the field. It was capped off by Full Back Josh Fernandez breaking the goal line from two yards out and with the extra point, it put the Cats up 7-0. Later in the second quarter, Quarterback Nick Crockett would keep the ball, find a seam up the middle and go 45 yards for a Sonora score and the extra point would make it 14-0. Sonora’s Gabe Milbourn would haul in a Crockett pass and race 44 yards to the end zone but Calaveras would block the extra point and the Wildcats would take a 20-0 lead into halftime.

Sonora would get the ball on the opening possession of the third quarter and take advantage when Crockett added his second score, rushing 36 yards. Sonora would convert the two-point attempt to take the score to 28-0. Calaveras Running Back Clayton Moore would get them on the board on a 52-yard race to the end zone and convert the point after. At the end of the third quarter, it was Wildcats 28, Calaveras 7.

Crockett would add his third score of the night in the fourth quarter on a 15-yard run and the extra point would make the score what would end up being the final, Sonora 35, Calaveras 7. Calaveras takes on Argonaut on its home field next week and Sonora heads to Amador to take on the Buffalos, who beat Summerville last night.

Yet again, the Summerville Bears are defeated 7-49 by the Amador Buffaloes.

The bears knew coming into the game that the Buffaloes packed a punch, but they were not quite ready for this. The first quarter ended with Amador up 0-7 with only 6 offensive plays for the Bears. In the second quarter, Amador took charge and scored multiple times to end the half leading 35-0.

Starting the second half, the bears kicked off to the Buffaloes. Amador ended up driving down and scoring. The Bears came back and had the ball in their own territory but eventually had to punt it off. The return came way back into the Bear’s territory and Amador scored again to make it 0-49.

The fourth quarter was the most exciting for Summerville as they marched down the field with double-digit plays. Inside the ten-yard line, quarterback Jaden Brocchini faked a handoff and ran into the end zone for a touchdown. The end of the game came faster than expected with a running play clock and Amador enjoyed the 49-7 victory.

Next week Summerville will travel to Bret Harte to face off against the Bullfrogs. Last night was the third loss in three straight weeks for Bret Harte as they were defeated by Argonaut, 35-0.