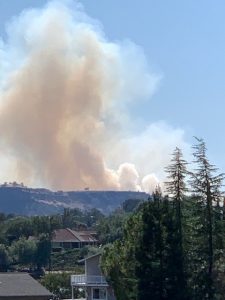 The acreage is holding steady at 83 acres while the containment has climbed from 75 percent Tuesday morning to 95 percent by nightfall.  As reported here, the flames broke out around 2:30 p.m. Monday in some grass near the intersection of Tulloch Road and Highway 108. The acreage exploded quickly up to an estimated 90 acres within the first couple of hours. Crews able to stop the forward rate of spread after five that evening. Better mapping on Tuesday morning put the acreage around 83 acres, according to CAL Fire.

No structures are threatened, and no injuries have been reported. Ground crews will remain on scene tonight mopping up while also strengthening fire lines and working towards full containment, which CAL Fire hopes to achieve sometime on Wednesday. Fire investigators are still working to determine what ignited the blaze. Update: According to Tuolumne Calaveras CAL Fire Unit spokesperson Emily Kilgore in the December 2019 end of year report here “The Sept. 23, 80-acre Tulloch Fire was caused by a vehicle.”