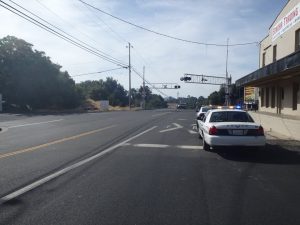 Sonora, CA — A motorcycle accident in downtown Sonora sent one person to a trauma hospital.

According to Sonora Police, the victim is a 34-year-old Sonora woman who was riding along on a motorcycle behind the 30-year-old driver as the pair were traveling south on Washington Street Monday morning.

Police recount that the bike, a 2014 Harley Davidson, struck the rear of a 2008 GMC box truck that was preparing to turn right from Washington Street near Hospital Road. Both the driver and passenger were ejected upon impact. While he sustained moderate injuries, the woman was flown to a valley hospital for treatment of serious although non-life threatening injuries.

Police note that both the driver and passenger were wearing helmets and that the cause of the collision is still under investigation.