Losses All Around For Mother Lode Teams 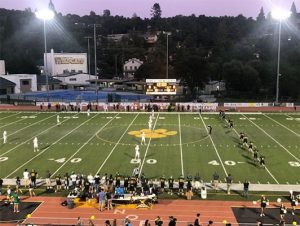 All the Mother Lode teams were defeat in week four of the high school football season.

The first quarter was a hard-fought battle with the Wildcat defense stuffing Hilmar for a 6-yard loss on the opening play. The ball would go back and forth with the Cats making a huge goal-line stop. Late in the first quarter the Yellowjackets Aiden Azevedo rushed from 4 yards out and the score would be 7-0.

In the second quarter, Sonora put together a time-consuming drive capped off by a 14 yard run by quarterback Nick Crockett and with the extra point it was tied up at 7 apiece.

Toward the end of the second quarter, Wildcat’s Hunter Foust would snatch a tipped ball and on the return a streaking Hilmar defender who, with a clean tackle, would pop the ball in the air. The Yellowjackets recovered the pigskin deep in Sonora territory. Hilmar capitalized on the turnover, scoring on a 10-yard pass and with the point after it was 14-7 Wildcats down going into halftime.

Hilmar would add two more scores on two passing plays and the final score would be 28-7, the Wildcats losing to last year’s Division 6 CIF Section Champions. Sonora stays at home again next week against West High of Tracy.

After coming off a sad defeat to Ripon Christian, the Summerville Bears traveled to Hughson to take on the Huskies.

After four long quarters, the bears got attacked by the Huskies to go down 30 to 0. Only once did the bears get close to the end zone but a fumble occurred, and they gave up the ball inside the 10. The Bears defense was a key factor, holding Hughson to only one touchdown in the second half.

Thorstead field, home of the bears, will be the place to be as Summerville takes on Delta Charter for their Homecoming next week.

Bret Harte High was defeated at home by El Dorado, 21-3. The Bullfrogs remain with home-field advantage next week against Arroyo High School from San Leandro. Calaveras High had a scoreless night on its home turf losing to Ripon, 24-0. Next week the team heads to Sacramento to take on Bradshaw Christian.