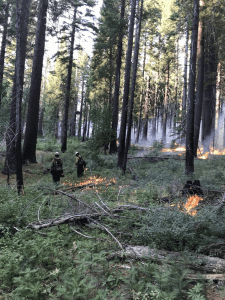 As reported earlier, the area is west of Cherry Lake and 12 miles southeast of Twain Harte. Tonight will be the final stretch of planned burning to put the fire size around 700 acres.

Groveland District Ranger Jim Junette says, “We’ll still have staff on-site afterward, probably for about another week, just to monitor and make sure the fire stays within the containment lines.”

He adds, “We appreciate the public’s tolerance of the smoke we have put into the air and cooperating by staying out of the area near the fire and allowing us to do our thing.”

The smoke has been visible at times around areas like Groveland, Twain Harte and Tuolumne.