Two Loses With Nearly the Same Score, One Win 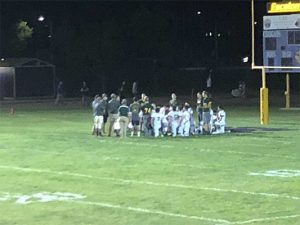 Sonora Wildcats take the field against the Escalon Cougars

Some hard-hitting action led to one win and a couple of losses on the High School Football gridiron.

The Wildcats lost their away game 35-13 to the Escalon Cougars. Sonora played well in the first quarter only allowing a touchdown by Escalon and it was 7-0 going into the second quarter.

The scoring would pick up to open the second quarter on an Escalon 38 yard pass, but the Wildcats would get the ball and drive down the field on the next possession with Elijah MacDonald rushing from two yards out to break the scoring drought for Sonora. The extra point attempt sailed wide, leaving the score14-6 in favor of Escalon. The Cougars would score again on a pass for 42 yards and with the extra point, it was 21-6 Escalon. A fumble by Sonora at the end of the second quarter would take one bounce and land into a Cougar defensive lineman’s waiting hands. Escalon capitalized deep in Sonora territory and drove down scoring from 4 yards out and with the extra point, Sonora was down 28-6 going into halftime.

The second half would see a scoreless third quarter. Then the Cougars completed their third touchdown pass for 29 yards and with the extra point, it was 35-6. Sonora came charging back, driving down the field, and Full Back Joshua Fernandez would punch it in from 4 yards out and with the extra point tacked on, the final score would be 35-13 Escalon.

Wildcats head home next week to take on the Hilmar Yellowjackets from Dunlavy Field at 7 p.m.

The Summerville Bears had an extremely tough night as they lost to the Ripon Christian Knights 36 to 13. The Knights started the scoring with a 55-yard touchdown pass in their opening drive and never looked back. It was 14 to 0 at the end of the first quarter and 23 to 7 by the end of the first half.

The Bears gave up about 50 lbs. per man on the front line. It was apparent on most running plays as the running backs were often hit before they reached the line of scrimmage and quarterback, Jaden Brocchini, was forced to roll away from would-be sackers on almost every pass play. Also, five turnovers and many penalties stopped many Bear drives in their tracks.

Two bright spots for the Bears were the running of Jaden Brocchini, mostly on scrambles, and Running Back Titus Shirley’s receiving, who caught six passes for a total of 56 yards. The two Bear touchdowns came on short runs by Brocchini and Running Back Nick Veach.

The Bears will be away for the third week in a row as they visit the Hughson Huskies next Friday where they hope to even their record at 2 and 2.