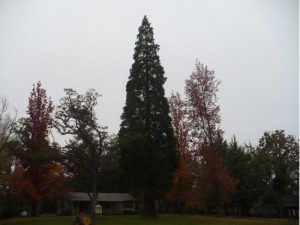 Altaville, CA — The new CAL Fire station planned for Altaville just north of the Hwy 4-49 intersection has drawn some controversy all because of "The Tree."

According to CAL Fire Public Information Officer Steve Hollett, a giant redwood must be removed to make way for the new station but many residents are "up in arms" about the removal of the tree.

Hollett says the tree simply takes up too much room for the equipment that will be housed at the new facility. He adds, though, that a new redwood will be planted.

The entire facility, constructed in the 1950’s, will be upgraded with the elimination of unisex restrooms. New quarters will be built along with a storage area for dozers and an auto shop that will be located near the back of the property.

Hollett adds that ground could be broken by April or May of next year.