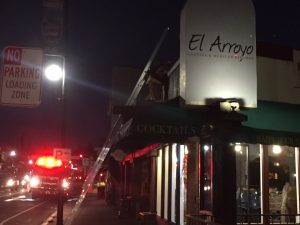 Sonora, CA — There is activity this evening at the El Arroyo restaurant at 126 South Washington Street in downtown Sonora.

The Sonora Police Department reports that a fire ignited inside the wall of the restaurant and thankfully it was quickly contained. There was reportedly minimal damage. Traffic is being rerouted around the fire, but the PD reports that the Washington Street will soon reopen because the fire has been extinguished.